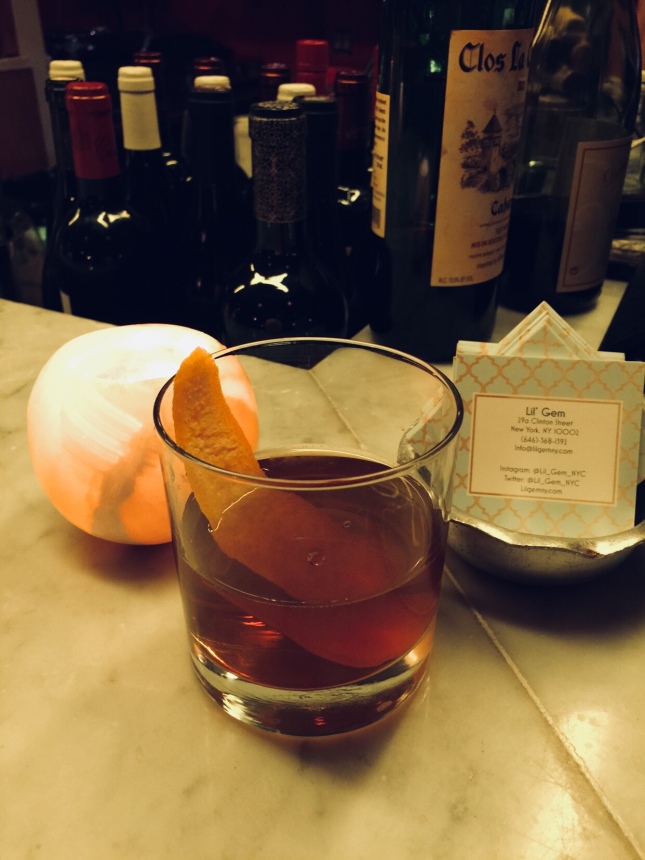 It’s been way too long since I wrote anything. Hopefully this will be the fix to that. This is an interesting pour of Elijah Craig with Del Professore vermouth and a healthy slice of orange rind. Wow was it a great drink. I am so happy to be writing again. 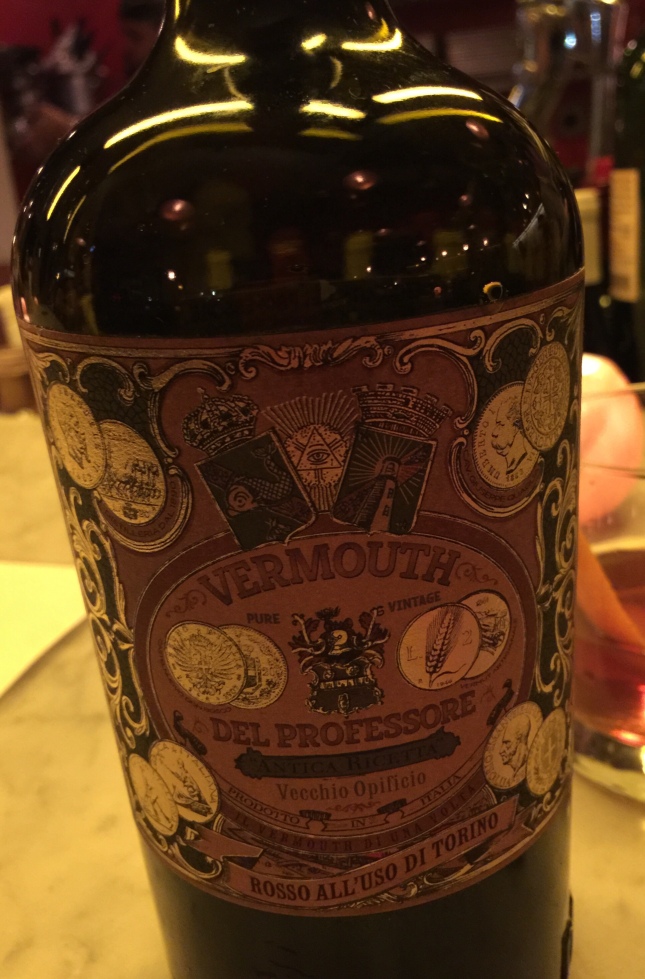 Posted by mickcoconcarne on February 23, 2018 in Uncategorized 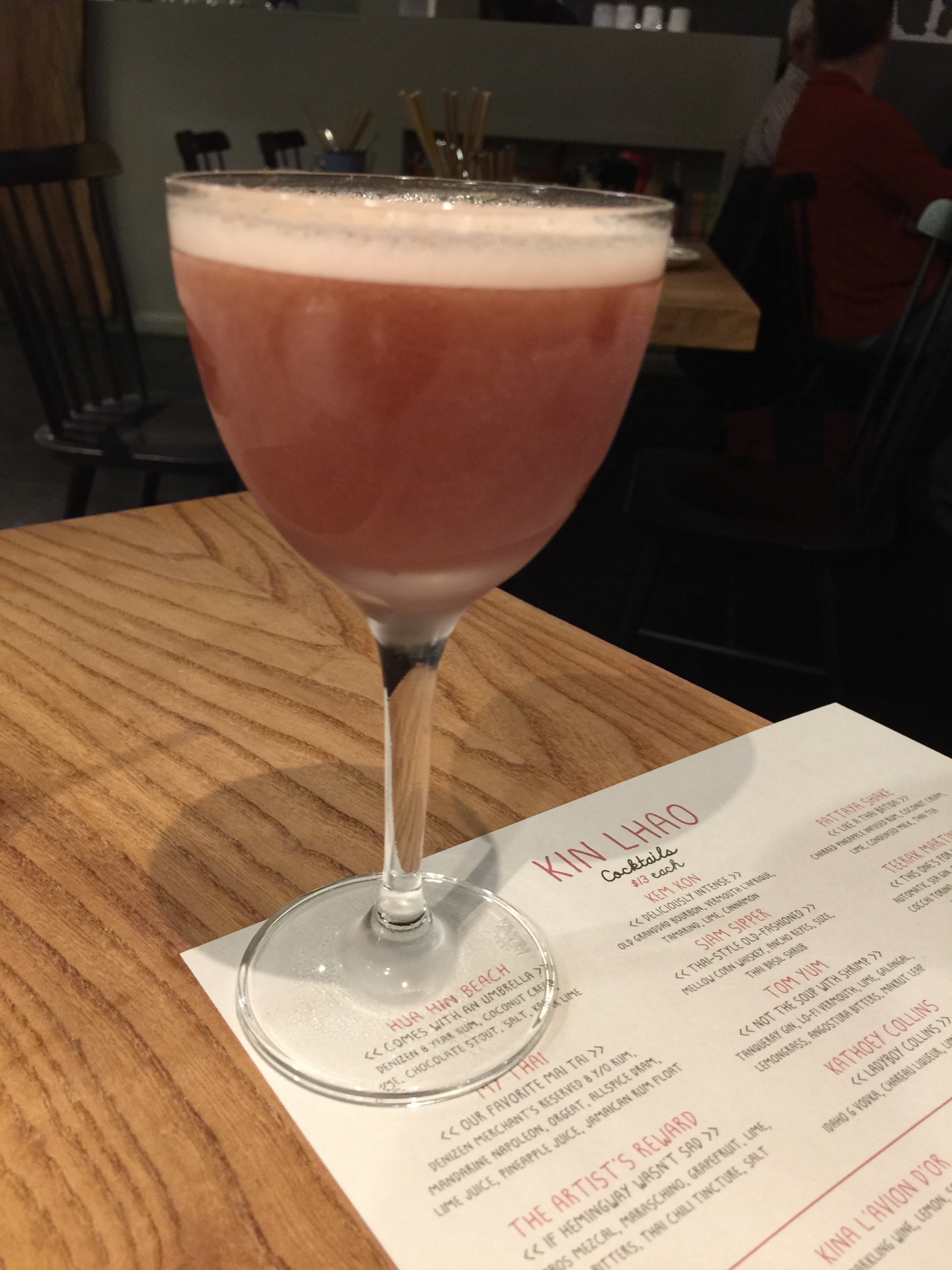 Ka Pow! – “What is that?”, Was my first reaction. That is the most unique and crazy Manhattan-like drink I have ever had.

Made of some normal and some unexpected ingredients that I think we worked well together. Coincidentally, I think this was also very seasonal for Fall, but I think that was unintentional by its creator and more in my head (being in cool and damp San Francisco in November). No matter how it was intended, I really liked this cocktail as it paired well with the amazing Thai food served.

The Kem Kon was made by mixing the following ingredients into a 2/3rd sized steeped cut martini glass:

Posted by mickcoconcarne on November 11, 2017 in Uncategorized

The Round Robin Bar at The Willard Hotel, Washington, DC. 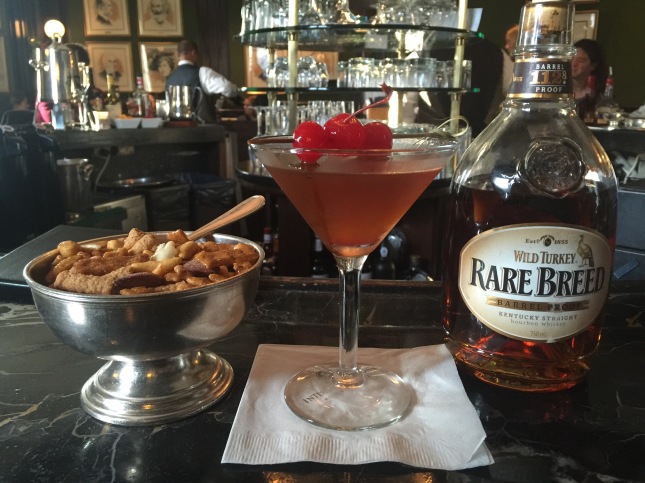 Screaming in at 112.8 proof, this Wild Turkey Rare Breed Manhattan, was an interesting way to end a day in Washington D.C.  The Round Robin Bar is a fantastic combination of both ideal location within the capital and historical vibe.  The Willard Hotel, in which the bar resides, was the host to a meeting that started on February 4, 1861, and was the  last attempt to get the North and South to come to a peaceful resolution of differences before the Civil War.

This drink may have helped get a better result at the meeting, as it was full to the lip of the glass with liquid jetfuel.  I requested the mixture, and in hindsight it was probably too high temp for the drink.  The Wild Turkey, while a very nicely constructed bourbon, has too much screamin’ rebel in it for the vermouth, bitters and three little cherries to handle. 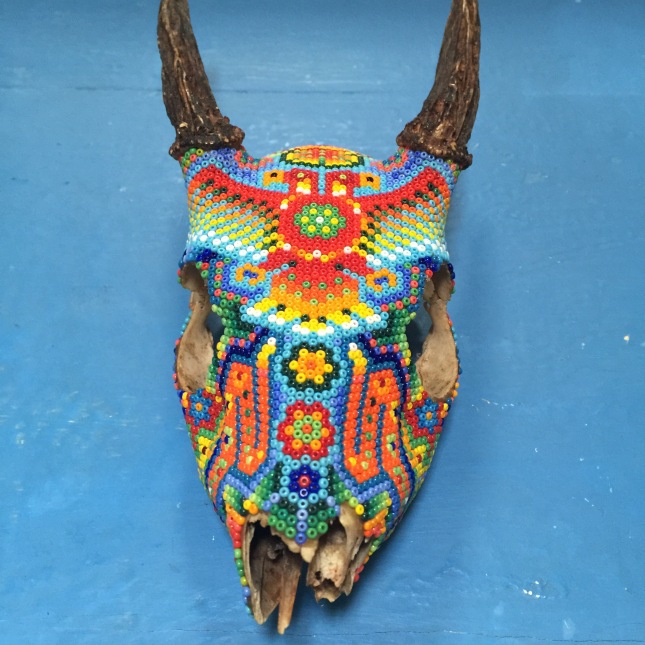 Sometimes you find a gem at local markets.  This weekend we found one.  A small, very old, deer skull adorned with traditional Huichol Art from the Huichol people who live in the states of Jalisco, Durango, Nayarit in Mexico. Now items are decorated with small colorful beads, but long ago they used to be decorated with yarn.  The art objects range from ceramic vases, figures and animals, to actual bone artifacts.  With only 50,000 Huichol left, and far fewer able to reproduce this craft, art objects like this are becoming very hard to find.

Most outsiders are not aware that most Huichol patterns and designs have religious and cultural significance. These patterns can be found on a wide variety of objects including carved and beaded on masks, gourds, musical instruments and embroidered on clothing objects such as belts, sashes, side bags, and more.[1][2] Most have religious significance and many are influenced by visions which occur during peyote rituals.[1][2][11] Much of what is known about Huichol designs and symbols was put together by Norwegian explorer and ethnographer Carl Lumholtz in the late 19th century, but Huichol art and decoration has since become more varied.[1][6] However, plant and animal motifs remain the most common and most retain their original meaning.[6]

When ceremonial or religious items are made, all aspects of the making from materials to colors to designs are important as they are identified with particular gods and meanings. Mesquite and the color reddish brown belong to Tatewari, who is of the earth and the wood of the Brazil tree is related to Tayuapa or “Father Sun.” Symbols such as the golden eagle and macaws are related to Tatewari. Shapes such as the deer, coyote, pine tree or whirlwind can be associated with Tamat’s Kauyumari, who shaped the world. The salate tree, the armadillo and the bear are associated with Takutzi Nakahue, the mother of all gods and of corn.[2] The toto is a small white flower with five petals associated with the rainy season. Sashes and belts often have designs that mimic the markings on the backs of snakes, which are also associated with rain, along with good crops, health and long life.[6] The zigzag lines that emanate from all living things represent communication with the deities.[4] The butterfly motif is reminiscent of the Itzpapolotl or Obsidian Butterfly, a principal deity of the classical Aztecs, who the Huichols claim as ancestors.[3]

The most common motifs are related to the three most important elements in Huichol religion, the deer, corn and peyote. The first two are important as primary sources of food, and the last is valued for its hallucinogenic properties which give shamans vision 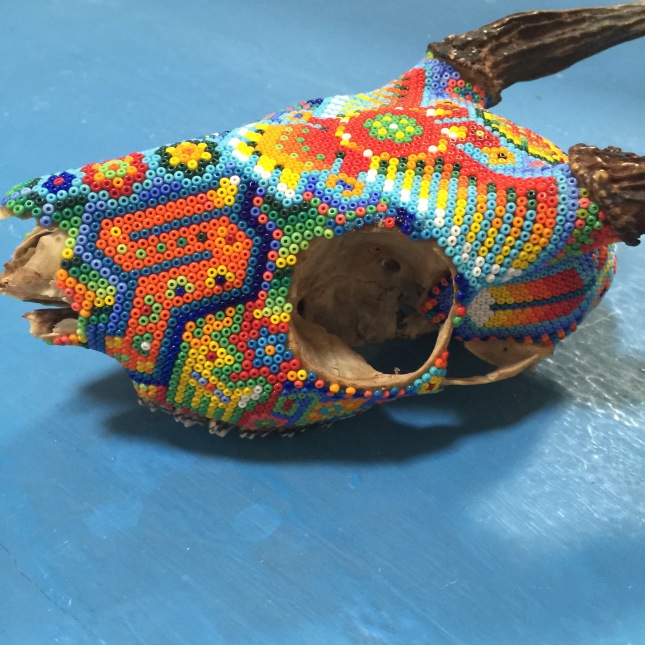 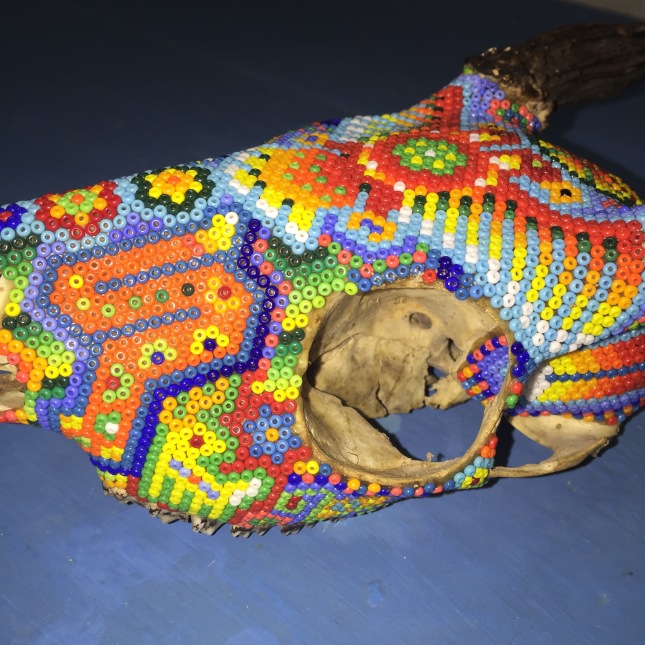 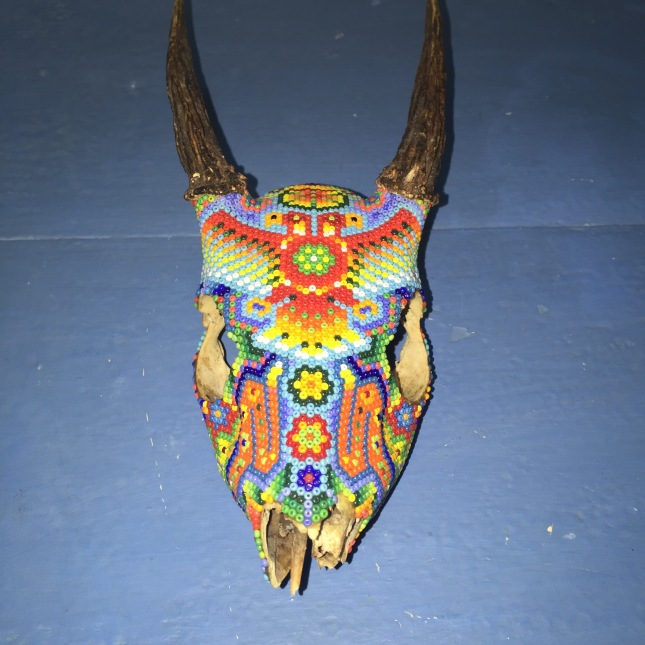 Posted by mickcoconcarne on November 2, 2015 in Uncategorized

Stranded in Mexico with Jim Beam and a Blue Plastic Cup 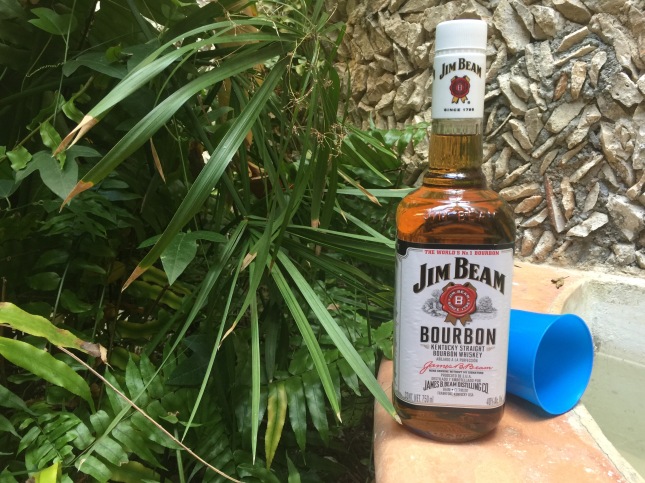 It seems to me that the large Bourbon houses are sometimes treated unfairly by consumers.  The good old stand-bye brands are frequently overshadowed by the snazzy looking boutique labels.  Bottles that are smaller than 750 ml at full price claw at the market that was forged at a much earlier time.  But sometimes, when you are South of the Border, the only brands you can get are the big guys.  Sometimes they are the only game in town. … and that is exactly the place I am in – Merida, Mexico is where I am – the middle of the Yucatan peninsula. Tequila and beer is everywhere.  Bourbon, not so much. Proper glass tumbler?  No freakin’ way.  But at 175 Peso’s a bottle ($11 US), it is a great deal !!!

Since 1795, Jim Beam, has been produced in Clermont, Kentucky and was one of the best selling brands of bourbon in the world in 2008.[1] Since 1795 (interrupted by Prohibition), seven generations of the Beam family have been involved in whiskey production for the company that produces the brand, which was given the name “Jim Beam” in 1933 in honor of James B. Beam, who rebuilt the business after Prohibition ended.

Posted by mickcoconcarne on October 30, 2015 in Uncategorized 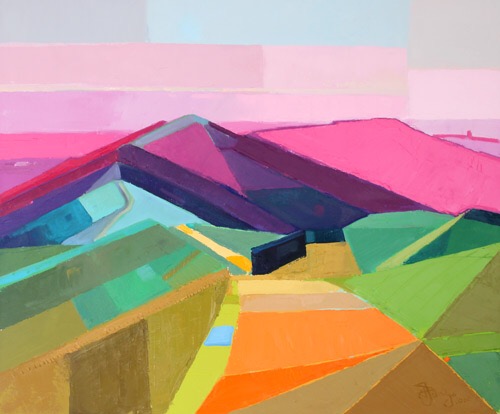 Anthony Bridge  is a Plein Air artist with a contemporary style.  Much of his work includes a modern and blocky take on the hills around Malvern (UK).  Allowing the natural colors to be replaced by a much more vibrant tones really makes for an interesting look of the peaks, valleys and fields 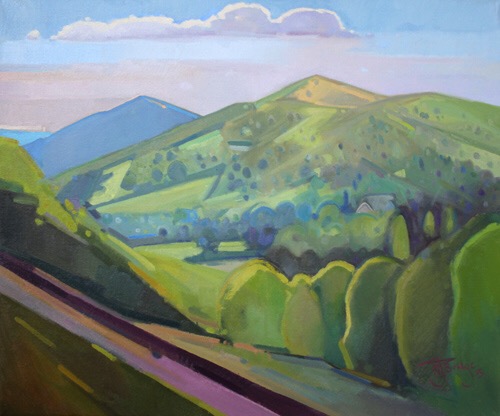 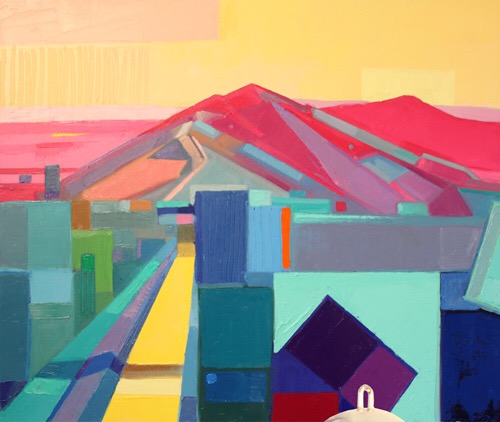 Posted by mickcoconcarne on October 29, 2015 in Uncategorized 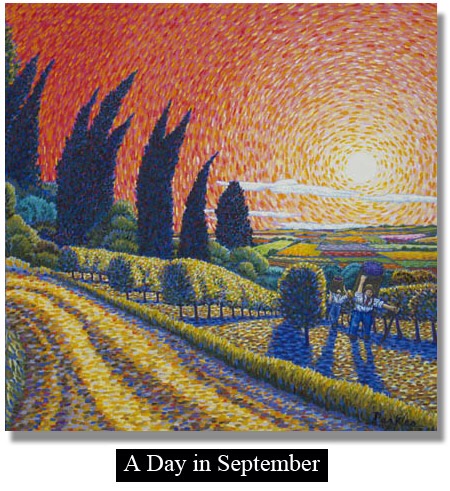 Parker Fine Art is the home of David S Parker.  David is an artist with a style that crosses modern and impressionism with flavors of Van Gogh (from my eye), from his words on his site it says “Contemporary Impressionism used to convey optimism”. I think that either way it is magnificent work .  Learn more about David the artist here,  Facebook, and some of his available work .  @parkerfineart

Posted by mickcoconcarne on October 25, 2015 in Uncategorized 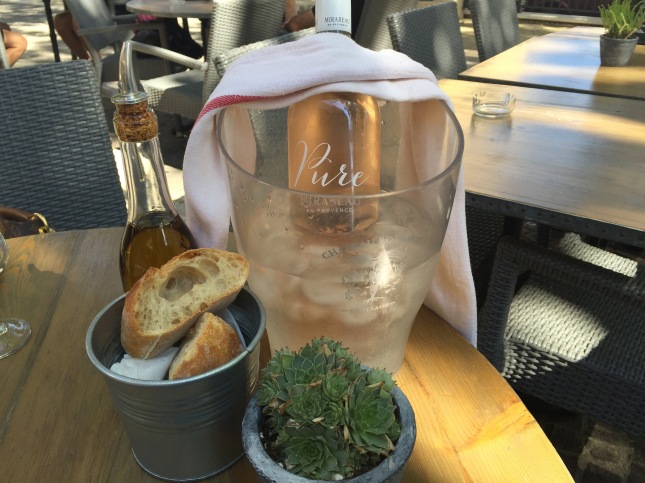 While having a pleasant lunch in Cotignac at Cafe Du Cours had had the good fortune to enjoy a bottle of Mirabeau “Pure” Rosé. I might have been the lightest colored Rosé wine that I have every had.  On this particular warm day while house hunting, we found it very refreshing and perfectly paired with our lunch filled with locally grown greens. END_OF_DOCUMENT_TOKEN_TO_BE_REPLACED

Posted by mickcoconcarne on October 21, 2015 in Uncategorized 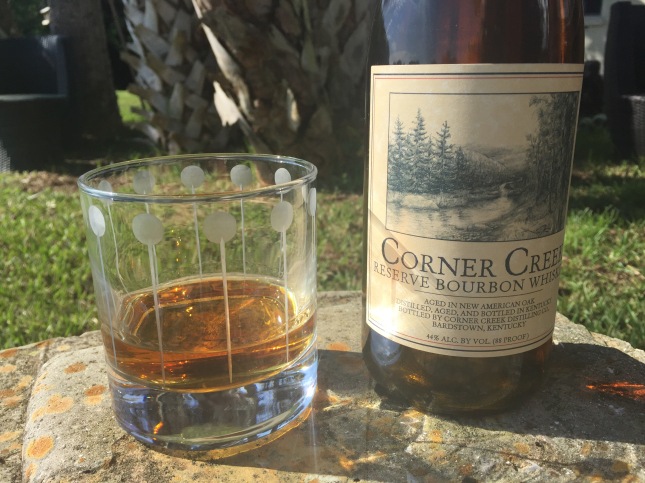 The only place to start out with my review is by using the word “balanced”.   This bourbon is very light in color and incredibly balanced. The taste was so mild that I wondered if it was bourbon at all. That may sound like a bad thing, but believe me –  it is a good thing as it all somehow works for this special bourbon.  Corner Creek Bourbon was so unique, that I had to look a the label of the Pinot Noir shaped bottle again. END_OF_DOCUMENT_TOKEN_TO_BE_REPLACED

Posted by mickcoconcarne on October 9, 2015 in Uncategorized 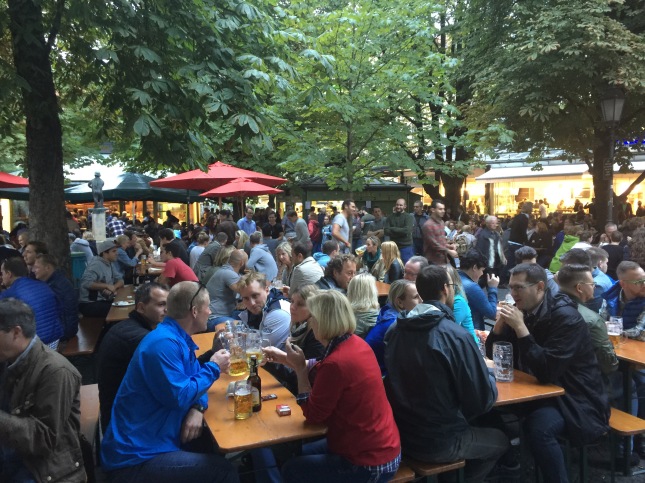 If you ask someone to tell you what the first thing they think of when you say Germany, most of them will say “Oktoberfest”. The image of men in lederhosen drinking out of large steins fills the mind. END_OF_DOCUMENT_TOKEN_TO_BE_REPLACED

Posted by mickcoconcarne on September 20, 2015 in Uncategorized