For some peculiar reason Old Fashions made with Canadien Maple Syrup and Woodford Reserve are in vogue in London. This is the second time in a week that a restaurant had them featured on the menu.  I wonder if Woodford representatives are on patrol here?  I am not complaining as both times I have had the drink it has been perfect.  Even though it is obviously a sweet drink, and definitely out of my normal barel-comfort-zone, I enjoyed them.  A boozy desert.

Tonight I had my drink in the Copa restaurant across the street from the beautiful St Paul’s Cathedral. I nice eerie sky over the magnificent dome. 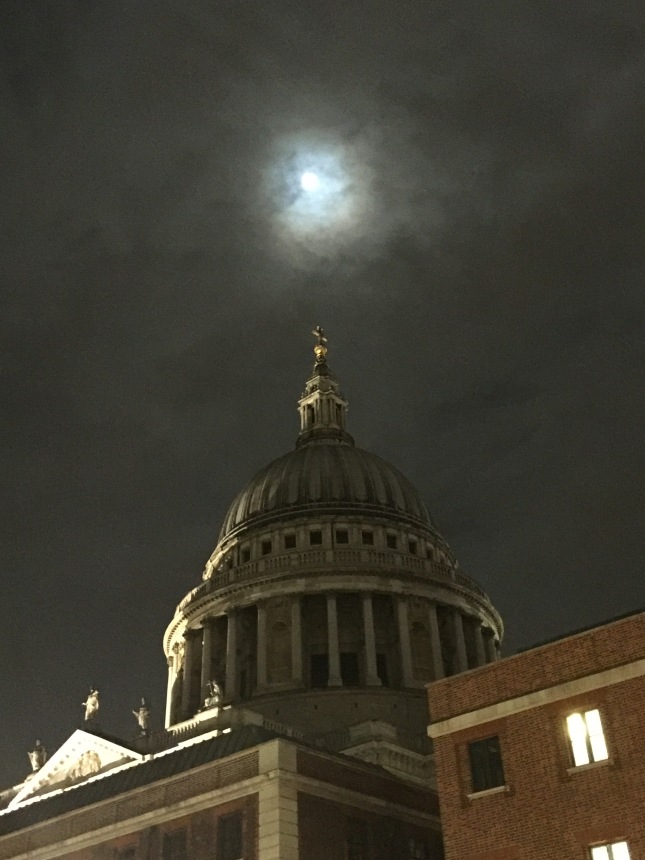 Posted by mickcoconcarne on January 19, 2017 in London

It nice to be back in London on a cold wet windy blustery gloomy summer evening. The sunscreen business must be awful, but I am sure the parka industry is booming.

I am enjoying a nice pint of Samuel Smith’s Organic Lager at the Rising Sun pub which sits across from St. Bartholomew The Great Church (from the 12th century)

Posted by mickcoconcarne on June 26, 2016 in Around the globe, Beer, London

During the past few years I have started collecting 1st Edition / 1st Printing books.  Most are relatively new books that I speculatively believe will increase in value over time.  Arguably the most hotly-anticipated novel in the world in 2015 was released today in the US and UK.  Harper Lee’s much awaited Go Set a Watchman.  Since I am in London today – I was lucky to have been able to pick up the UK 1st/1st with the UK cover (my copies photo is above).  Compared to the US cover, it appears to me to be flashy and out of place.  Especially when you look at the original To Kill a Mockingbird cover from 1960.  But, it is still definitely collectable.  Case and point – A nice copy 1st/1st of To Kill a Mockingbird could get you between $5,000 – $15,000. END_OF_DOCUMENT_TOKEN_TO_BE_REPLACED

Posted by mickcoconcarne on July 14, 2015 in Uncategorized

Relaxing with Vincent (and a nice Pinot)

Somehow it got to be 7:27 PM in London.  As the oddly still-too-light-out sky starts to get darker, I have yet again decided to relax in The Heron Club and have at least one 250ml glass of 2012 Escale Pinot Nior.  So far on this 10 day trip, it has been the defacto wine for me to drink while I read an Taschen published art book. Tonight’s read is on Van Gogh and I am amazed that this book had 700+ pages of his works and most have a story or two behind them.  Every time I pick up a book published by them I am pleased by the quality and comprehensiveness.   END_OF_DOCUMENT_TOKEN_TO_BE_REPLACED

Posted by mickcoconcarne on July 13, 2015 in London, Wine

I just finished up a unplanned mission of life importance for my nephew (see photographic and video proof below).  I am now gathering the spoils of victory at the ArtilleryArtillery Arms pub which happens to be across the street from Bunhill Fields Burial and Gardens (wiki, official).   My mission was simple,  see if Wiliam Blake, who is buried here, approves of my nephew Barry’s boobie tattoo of his poem quote “Without Contraries/ is no progression” from Blake’s Marriage of Heaven and Hell.  END_OF_DOCUMENT_TOKEN_TO_BE_REPLACED

Posted by mickcoconcarne on July 12, 2015 in London

Escala 2012 Pinot Noir at The Heron

After a long week I decided to chill out at the lounge at The Heron and ordered a 2012 French Escala Pinot Noir. I enjoyed it very much, despite being seemingly impossible to find a worthwhile link on the web about it.  I found the description on the lounges wine list to be fair –  it said that I should expect “elegant, fruity, with silky tannin structure “. Ummm.  Yep. ?  I think.  I was actually so tired that all of this could have been true, but I would have missed it.  I do remember that it was pleasant and thinking that I will order this again.  And since I am a pain in the butt with wine …  I have to believe in hindsight that their words were a bullseye.  …  Maybe I need to go back and try again.  Cheers

Posted by mickcoconcarne on July 11, 2015 in London, Wine

The Heron Club with Woodford Reserve

My day started in Tampa, flew to Dallas for a connection on to London.  Worked a full day and now I sit in a private lounge, in a private residence of corporate apartments.  The Heron , both the building and the club, are of superior quality and refinement.  My apartment is controlled via a spaceshipe-like control panel which is a little too advanced when all you want to do is turn on the lights 🙂 END_OF_DOCUMENT_TOKEN_TO_BE_REPLACED

Posted by mickcoconcarne on July 7, 2015 in London

The Perfect Manhattan at Roast

On a relaxing Friday afternoon I was able to relax at Roast restaurant at Bourough Market in London.  I had a perfectly made Manhattan made with Rock Hill Farms Single Barrel Bourbon

Martin, a exemplary bartender from Slovakia, made my drinks with equal parts of white and red vermouth and a freshly cut orange peel.  The result was a perfectly made drink that I had to have repeatedly.

Posted by mickcoconcarne on May 15, 2015 in Around the globe, Uncategorized

When in London, Do as an American…Sometimes 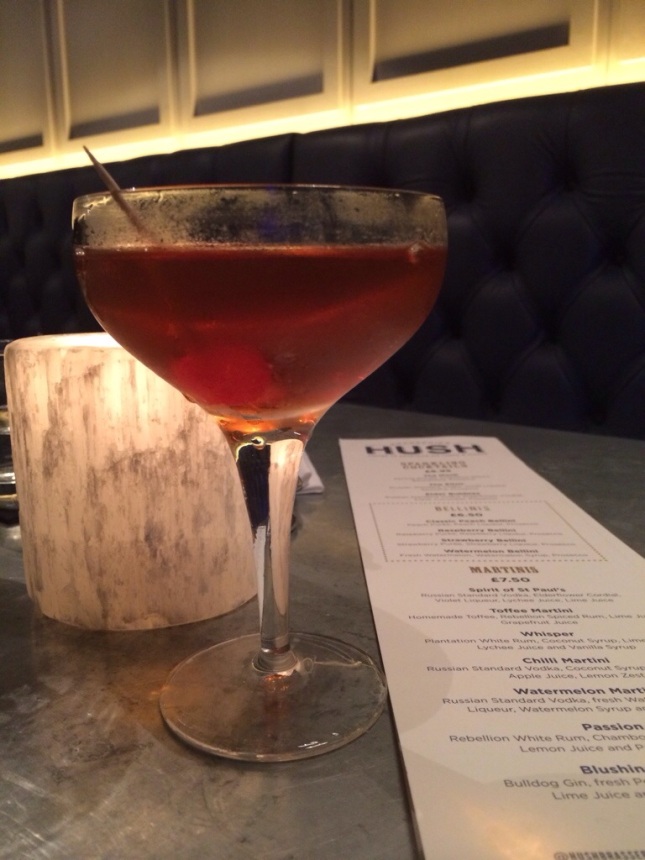 Dining and drinking solo at Hush, a restaurant in the shadow of St Paul’s Cathedral in London, was made less pathetic by ordering a duo of Manhattans. The first made with Buffalo Trace and the second with Wild Turkey 101. Firstly, the bartender made two identical drinks. Exactly as any classic cocktail book would instruct them to be made. There was no deviation from recipe tonight. So which did I like better? …. Oddly enough I thought the Buffalo Trace version tasted very … “normal”. It was exactly as it should have been made. It tasted exactly as it should have tasted… That is why tonight I chose the Wild Turkey 101 entry. It was remarkably bright. Incredibly smooth. Clean, even a little soapy ( in a good way somehow) with an after taste lingering of mild tobacco. Very nice, interestingly surprising.

Posted by mickcoconcarne on January 15, 2014 in Around the globe, Heads Up

Bold as Brass in London

Every once in a while (actually quite frequently) I drink something other than Bourbon. Today happened to be one of those days. I was walking in London and found myself on a small street watching a brass band set up in front of a perfect London pub. The band happened to be the somewhat famous Hackney Colliery Band and they were promoting their new beer ( yes, the band has their own beer ) called Bold as Brass made by Truman’s Brewery. Being a patron of the arts I felt obligated to try a pint or two and enjoyed it with many Londoners and tourists alike.

Posted by mickcoconcarne on December 31, 2013 in Uncategorized